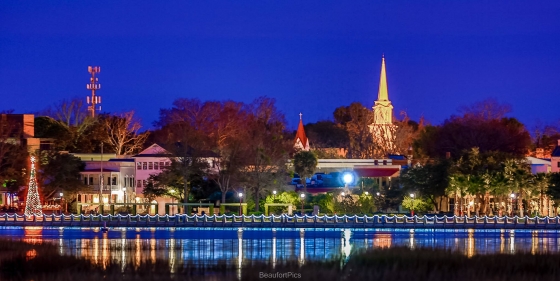 for being ranked #1 according to

From historic homes and churches to live oaks and Spanish moss—no wonder, readers of Southern Living picked this Lowcountry jewel as the best in the Palmetto State.

The coastal town of Beaufort SC is a historic gem nestled in the heart of the low country. Its beautiful antebellum homes date back to the pre-civil war period. The beautiful historic churches are a vital element of Beaufort's wealth of cultural history and are definitely worth a visit. Take a horse buggy tour to discover the secrets of a historic era.

A walk downtown on Bay Street features unique shops, art galleries, and fine restaurants. Outdoor diners have a scenic view of the Henry Chambers Waterfront Park and the Atlantic Intracoastal Waterway. The Woods Memorial Bridge is one of Beaufort's most notable landmarks. The swing bridge connects downtown Beaufort with the outer Sea Islands.

This Lowcountry gem has captured the attention and been recognized by Southern Living many times for its charm, beauty, and friendliness. They recently called Beaufort, "The Small Town We Love". Buzzfeed named Beaufort "the coolest spot in the entire country." It's easy to see why the second oldest city in South Carolina has drawn so much attention and become notable for its beauty, history, and southern hospitality.